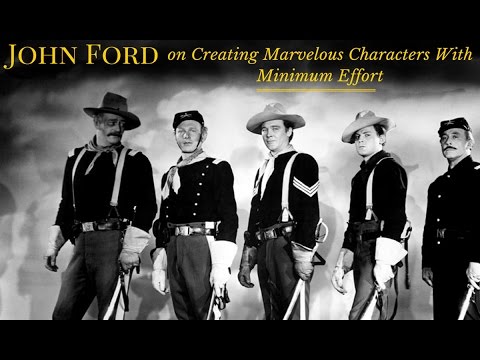 This week’s video shows how a little subtext can make vivid characters out of your entire cast.
Video Transcript:
A few weeks ago, we talked about how we do not want ciphers in our stories.We want fully fleshed-out, rounded, dimensional characters—people who feel real enough that maybe we could see them in the coffee shop on our next trip in. In that discussion, I talked about howThe Monuments Men presents a great example of how not to write characters.
But for every negative example, it’s always helpful to also explore a positive example. And it just so happened that shortly after I aired the video onMonuments Men, I ended up watching one of my favorite westerns, John Ford’s cavalry ode She Wore a Yellow Ribbon.
Now, I’ll start off by saying this is not a perfect movie. Its Third Act, in particular, is lacking in some areas. But one thing Ford did right—as he so often did—was the characters. Really, the whole story is more of a character study than it is any kind of an action movie. And the really beautiful thing about these characters is that the majority of their depth is under the surface.There are only a bare handful of explicit references to character backstory or motive.
We know John Wayne’s character—an about-to-be-forcibly-retired cavalry captain—lost his beloved wife and daughters.
We know Joanna Dru’s flirty female lead has come to Ft. Starke to visit her aunt and “see the west.”
That’s it. Everything else about these characters is left for the viewer to glean from the subtext.
And the subtext is rich. Just about every character offers interesting food for speculation—from Ben Johnson’s wise but reticent Confederate-captain-cum-Yankee-sergeant to Victor McLaglen’s violent but devoted sidekick role to the entirely platonic but affectionate relationship between John Wayne and his commander’s wife.
If you want to learn how to waste your characters’ potential, go watchMonuments Men. If you want to see how to do it right, watch She Wore a Yellow Ribbon.